Over the weekend Illinois governor J.B. Pritzker appeared on Face The Nation where he stated high hopes for Illinois’ future. During the interview, the governor spoke about COVID-19, it’s effects, and how Illinois is nearly ready for reopening. This came as a shock and delight to many across the state, since many have grown accustomed to bad news from the governor. In fact, two weeks ago he had announced an extension of the original stay at home order to May 30th. Finally, some good news in what feels like a cycle of bad news, however the fight is not over yet. This post will explain what “bending the curve” means, and when Illinoisans can expect the state to begin opening up again.

Throughout the COVID-19 pandemic, health officials as well as state officials have thrown around several phrases without much explanation. From social distancing, to bending the curve, COVID-19 has changed many aspects of our daily lives. Now we must clarify what these terms mean, and what it looks like when we accomplish them. When you hear officials speak about bending the curve, you may ask yourself “what curve?” Well, what officials are referring to is the timeline of the virus, when it peaks, and when it falls off. For example, picture a roller coaster as it ascends to its peaks slowly, and then rapidly falls. Although it is not entirely certain that Illinois hit its peak, given the data and reports so far, it seems that way.

When officials speak about COVID-19 peaking, they mean a time in which the most confirmed cases appear. As the numbers in Illinois show, cases started in low numbers, but grew over time. For a state or country to peak, the number of new cases would have to grow at staggering numbers, meaning a small amount of cases one week turns into a large one days later and so on. The only way to really know if your state or country peaked would be a flattening of new cases confirmed, or flattening the curve. 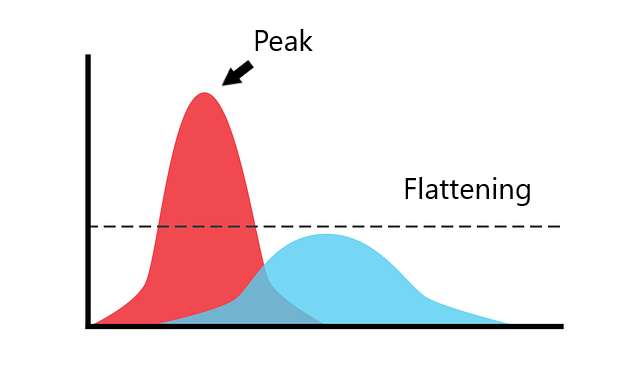 Flattening And Bending The Curve

However, flattening the curve is not the same as bending the curve, nor does a drop in confirmed cases mean we have passed our peak. It’s important to remember that as numbers trickle down, we must all keep our guard up and remain vigilant. Flattening the curve means the number of new cases did not increase front the previous day and continues that trend. Once it flattens, the number of new cases will begin to drop. If we remain focused, the curve will begin to bend downwards. At that point, the focus will shift from stopping the spread to getting the remaining sick people into recovery. Once the number of active cases drops off, we can officially declare ourselves past the peak point.

Look To The Future

As of the latest updated numbers, Illinois has over 60,000 confirmed cases, with over 2,000 deaths, and over 300,000 tests performed. The numbers look scary, but the stay at home order combined with social distancing has Illinois in good position. As of right now, the governor’s stay at home order is set to expire at the end of May. No one knows what the rest of the month will bring, but Illinois should remain hopeful about the future. So long as we continue to follow health officials orders, we can bend the curve!