Earlier this week, Governor Prizker hinted at the possibility of reopening Illinois in the near future. Now, Governor Pritzker has laid out his five phase plan called ‘Restore Illinois’, which comes in five phases. The plan does not include a timeline; instead it uses scientific measurements and data to determine the course of action. In other words, you can’t go from phase one to phase two without meeting certain goals regarding Illinois COVID-19 numbers.

The plan is already in effect, which is a positive sign as we move forward, however we must not get too comfortable. The virus is unpredictable, and some experts warn of a second and third wave of cases. Yet, if we all agree to follow the plan, we can reduce the chances of a second and third wave. This post will disgust the phases, and what each phase means Illinoisans.

Which Region Are You? 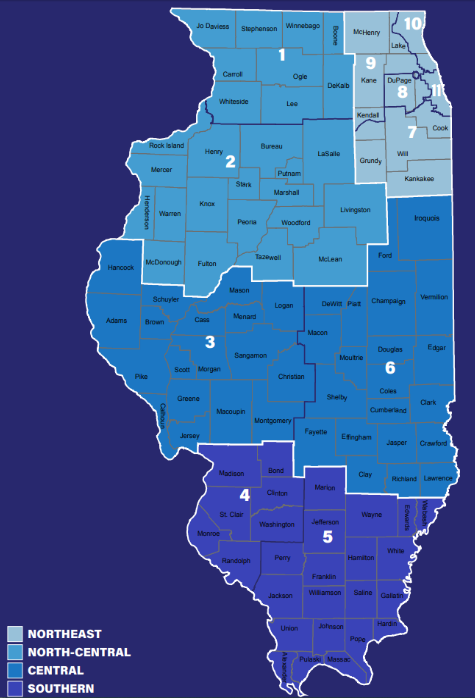 As part of the Restore Illinois plan, the state has been divided into 4 regions: Northeast, North-Central, Central, and Southern. Due to population differences throughout Illinois, and the efforts of some southern Illinois legislatures, rules apply differently to certain regions. As you can see by the image from the Governor’s office, each region has a different shade of blue.

The color of your county determines your region. Each region adhered to phase one restrictions, but each new phase might apply different rules or enforcement by regional basis.  In other words one part of the state might be on phase 2 while another is still moving from phase 1.

As per Gov. Pritzker’s stay at home order, Illinois has been under strict social distancing rules. This phase is meant to stop the initial spreading of the virus, which seems to be working as we speak. This has resulted in Illinois already transitioning from phase one restrictions into phase two safely guidelines. Illinois has transitioned form phase one to phase two because our hospital capacity improved, the new number of cases slowed down, and our testing capabilities increased.

Phase Two (We Are Here)

Since phase two restrictions rolled out, people should still wear masks in public settings and practice social distancing when possible. New rules allow certain gatherings such as a funeral attended by family. Non-essential travel and gathering are still discouraged and prohibited. However, non-essential businesses can offer curbside pick-up and delivery. Lastly, some state parks will reopen, giving Illinoisans some feeling of normalcy. Not every park will open, however as we move along the phases to restore Illinois, we must be patient. We reach phase 3 when hard percentage goals are met, and we can start tracing cases in addition to the number of new cases dropping.

During phase 3, Illinois will allow gatherings of 10 or fewer people, while continuing face coverings standards. Although bars and restaurants will remain closed for dine-in, people can flock to state parks which will be open. Those who wish to travel can do so as long as they follow official guidance. And, yes, barbershops and salons, who follow health guidelines, can resume business as well as retail stores. Reaching phase 4 means maintaining capacity goals, testing anyone regardless of symptoms, and tracing cases within 24 hours of diagnosis.

Once phase four begins, we should see even more normalcy to return. The state will allow increases in gatherings, and retailers can open with limited capacity. At this point, just about every business will be open so long as they comply with health department guidelines. Additionally, school will reopen in a safe manner. Although it would feel like everything is back to normal, reaching the next phase would truly “Restore Illinois.”

The last phase in the governor’s plan is more of a finish line than an actual phase like the others. Gov. Pritzker stated at his briefing “until we have a vaccine or an effective treatment or enough widespread immunity that new cases fail to materialize, the option of returning to normalcy doesn’t exist.” Yes, it sucks hearing our lives won’t be returning to normal soon, but the ends justify the means in this case. If we want any type of normalcy in our future we need to follow health experts guidance. Any resurgence in cases could land us back to square one, and no one wants that to happen again. 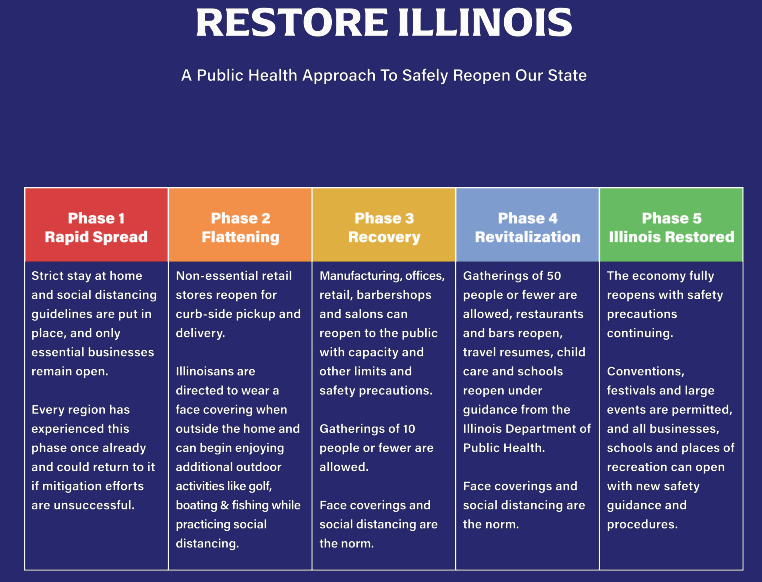 Restore Illinois is a five phase plan to get Illinois back on its feet.
Share
» Inline Ad Purchase:  Intext Link